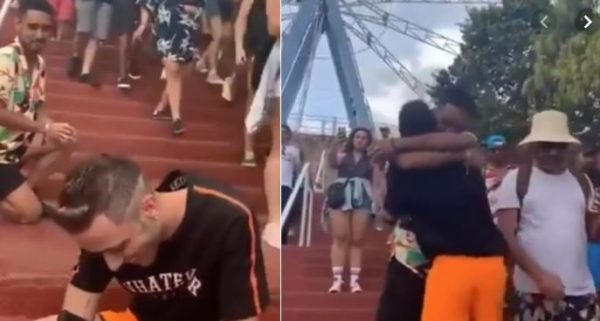 A man thought he was surprising his boyfriend when he popped the question while the pair were out on a date. It seems the boyfriend had his own surprise though and pulled out his own engagement ring that he had also been planning to present on the very same day. A video on social media has been shared showing the pair’s unforgettable reactions.

The video has been viewed over 17 million times on Twitter. It was shared by Twitter user MemesFolder. The footage had many different reactions from social media users and most of the responses were overwhelmingly positive. Twitter user DinAmycus said:

“I think it must be very cool that in a homosexual couple you don’t know which of the two will take the step.”

“Homosexual couples videos where one proposes to the other only for the other to freak out and pull out a ring too are definitely one of the best things on the internet.”

“This is not a meme this is wholesome. The homophobic people in the comments are the real memes.”

“If my proposal doesn’t go like this I DON’T WANT IT.” Wonderland449 said:

“I love that these two men were so in love & so in sync with each other.”

Viper_D_Spades said: “*Sees guy propose* Aww that’s precious. *Sees guy who was proposed to pull out his own ring HE was going to propose with* My heart can’t handle this much wholesomeness. May these two find eternal happiness!”

There were a few negative comments from those against the lifestyle. Either way, love always wins.

Everything is impossible until you take the steps to make it possible, be positive in every step you make. Nature will definitely give you the smoothest part of life. Email us on [email protected] Whatsapp: +233540577992
@HiplifeHiphop
Previous Rihanna Becomes First Black Woman To Succeed 200 Weeks On Billboard 200 Chart
Next Fat Joe Might Be Retiring: “I Think It’s Time To Give It Up”