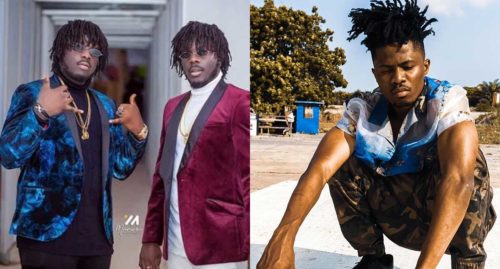 DopeNation after their diss song to Kwesi Arthur got leaked into the media space has sent a word of caution to the ‘Grind Day’ hitmaker.

DopeNation in a new video has revealed the true story behind the diss song. According to them, they were hijacked by Kwesi Arthur and his crew during the SRC Night of Ghana Telecom University.

DopeNation in the video stated that they were obstructed by one of Kwesi Arthur’s team members when their DJ had made all preparations for them to mount the stage.

After the incident, they came home and recorded the song but upon second thought, they decided not to release it since it was of no relevance.

They were disappointed at his behaviour and were expecting the rapper to apologise to them after the incident but that never came.

According to DopeNation, they didn’t release the song and had no intention of releasing the song, claiming that someone came to steal the song and leaked it. They only got to know when they heard the news about the song today.

They further revealed that they have, however, recorded four diss songs which they will release if Kwesi Arthur replies the already leaked song.