We were kidnapped, ‘raped’ and our ‘babies’ sold to ritualists – Woman reveals painful experience 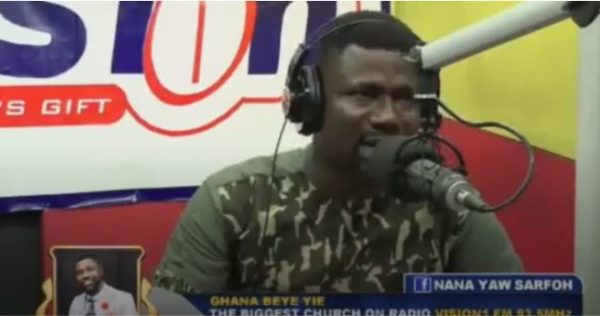 A woman, (name withheld) has shared her traumatizing experience with the world, how she was tricked, kidnapped and forced into prostitution.
Sharing her ordeal on Accra-based Vision 1 FM, she explained that she was introduced by a lady who posed as a benevolent person at a time when she was financially frustrated and stranded.

According to her, she had travelled to Swedru with very limited money to retrieve monies owed her by a debtor, upon reaching there however, she was dissppointed and had to return to Accra with the little money left. She got stranded halfway however because her money was finished and that’s how she met this lady who later introduced her to the ‘devils’.

“Someone owed me money for three years and he called me to come for the money at Swedru, I went though I didn’t have any money but realized he was lying. I didn’t meet him so I gathered the little money I had and returned to Accra but the money could get me only to Mallam Junction. I got there, sat and was crying. It was then a lady approached me and asked what the problem was. I told her and she offered help, she asked that I went to see her place so she can come and see mine after.

I followed her and while chatting at her place at Mallam, it got late and she told me she’d introduce me the next day to a friend who is a hotel receptionist. She prayed with me four about four hours and suggested I sleep at her place so we can go to see her friend the next day. The prayer bit calmed my fears and after we slept for a bit, in the morning she bought me a new dress and we set off for her friend’s.

On our way to her friend’s she picked up two others to join me in the car. We got to Tema. When we got there, she called someone else who brought a big car and picked us up from the Obinim junction. The car was tainted and I was sleepy so I slept. The others were watching movies on the TV in the car”, she narrated.

That was the beginning of her woes unknowingly. Having been offered a house help job by the said friend upon their arrival, she opted for that, knowing she will earn at least GHC180 on a monthly basis. She discovered however later that she had, by accepting to be a househelp, had signed up for her worst nightmare ever.

“When we arrived, they escorted us to a room and a man came to ask us why we were there. We explained how the woman said she was going to help us. He said there were options for us to choose. Either being a house help or being a sex escort and an agent, that each had its price”, she continued.

Adding, “When we arrived, they escorted us to a room and a man came to ask us why we were there. We explained how the woman said she was going to help us. He said there were options for us to choose. Either being a house help or being a sex escort and an agent, that each had its price”.

“I opted for the house help role, they showed me where I was supposed to sleep in another house, and I saw three girls wearing bra and panties only. I asked them about their roles there and no one was only willing to speak.
It was only after 3 days that one girl told me we couldn’t speak like normally in that house. I didn’t understand because I had been spoken to about being a house help and that’s what I had psyched myself for.It was a self-contained room. Things were normal for a bit after I got there, I did my house help chores whenever I woke up and I felt okay.I was in my room eating after two weeks when I was told to stop eating because I had a visitor. I was told to follow him, and obey him by one of the girls. He took me to a room and instructed I stripped. It was then I realized I wasn’t recruited to be a house help, and I was told to obey every instruction I’m given if I want my peace of mind otherwise I’d be beaten, I realized I had been recruited into prostitution”.

As though that wasn’t enough, she narrated, some ‘doctors’ visited the compound monthly to do medical examinations of all the girls and if they noticed pregnancy, they performed an abortion. The foetus’ from these abortions were sold out to ritualists sometimes from neighboring countries or Ghanaians who needed them to perform certain rituals to boost their wealth.
“I noticed that doctors came to the house monthly to check samples of urine and all, if pregnancy was detected in any of the girls, the baby is aborted in that same house by the doctors and I know people from outside Ghana, either Togo or Benin for the aborted foetus and blood for rituals”.

Some pastors use these items for their ministry and others come for it for their work and shops and dealers. Some people even come for it for beans, mix it with the oil to sell but mostly, the Togolese come for it to sell. If you die in the process of the abortion, they bury you on the compound.

She further noted how she was maltreated and also threatened when she tried escaping and telling her story. She finally managed to abscond one time when she was called to go together with the leader of the ‘gang’ on an assignment outside the compound where they lived.

“They put sperms in your mouth and make you lick your own vomit….The day I escaped from “Budu”, I was called to go and escort him together with another lady”.