Why MF Doom Is Allowed To Use Imposters On Stage

For some high-profile figures, using body doubles is a vocational necessity. In the case of divisive political figures, they can be employed in situations that are volatile and may throw the purported world leader into harm’s way. When it comes to acting, stand-ins can be used to perform stunts or in scenes where an actor harbours a reluctance to bear all on-screen. In the world of music, on the other hand, this sort of large-scale public deception is far less commonplace. Broadly speaking, there is normally an attempt to maintain a sense of relatability to the world’s biggest artists that fosters brand loyalty and connection. Thus, the act of duping your audience in such a manner wouldn’t be conducive to staying in their good graces. With an artist’s prosperity and wealth all predicated on fans turning up to their shows in droves, purchasing merch and supporting their output as it comes down the pipeline, examples of such elaborate conmanship are few and far between, but not unheard of. 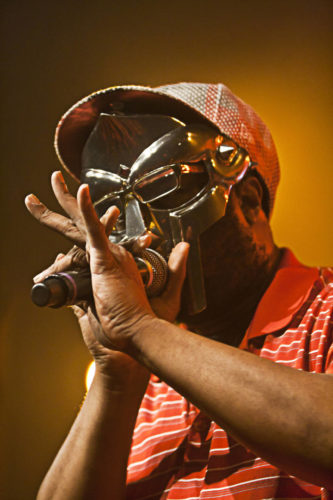 When they do occur, the audience and industry normally seeks swift retribution. Whether it’s Milli Vanilli, performing the music of the two other vocalists before it all unravelled with one backing track mishap, or Death Grips fans pulverizing Zach Hill’s drum kit after they no-showed a Lollapalooza set in Chicago, it’s been made clear that the music consumer won’t stand idly by and be sold a bill of goods.

In recent weeks, the use of doppelgangers has become something of a hot button issue at music festivals. In a move that would set the minds of would-be conspiracy theorists into overdrive, many believed that Kendrick Lamar perpetrated such a bait and switch on his fans at Day N Vegas. Notably low on energy and almost completely devoid of the sort of fan interaction that fans can normally bet on from the TDE flagship, the set left some underwhelmed and others in sleuthing mode.

Kendrick Lamar at Day N Vegas – Image by HNHH
“lowkey think #DayNVegas gave us a fake Kendrick Lamar last night. that was such a weird performance. Seen him 8 or 9 times now, and this just didn’t feel like him”, claimed one Twitter user, before a poll with upwards of 1000 votes determined that the man shielding himself in a black hat and shades wasn’t the internationally renowned artist at all. Sparking angry messages from attendees that rallied against what they saw as flagrant false advertisement, their discontent echoed the reaction that followed rumours of Jeremih defrauding fans in Houston with an impostor in a hat and hoodie that he refused to relinquish for the duration of the performance. Then in a similar vein, both ASAP Rocky and Buku festival came under fire amid allegations that Flacko had attempted to a similar piece of onstage trickery at the event in Louisiana. In a world where Drake is getting booed offstage for having the audacity to not be Frank Ocean, it’s unsurprising that fans are vocally speaking out when they feel they’ve been legitimately short-changed.

Characteristically prodded at by TDE’s labelmate Schoolboy Q, it seems as though the case of Kendrick and the body double is relatively easy to debunk. For one, this sort of scheme would be ill-fitting for K. Dot, flying in the face of the man-of-the-people mantle that he’s acquired in the To Pimp A Butterfly era onwards, and was likely the product of an off night. In other instances, for all we know, it could be possible. After all, there is a well-established precedent for using decoys in the realm of hip-hop.

Midway through his set at Adult Swim Festival, the beat music pioneer Flying Lotus teased the imminent arrival of a very special guest. “A lot of ya’ll know about my man MF DOOM right?” He drolly enquired. “Well I brought my man all the way from London to rock with ya’ll tonight.” As the opening strains of Madvillainy’s “Accordion” began to ring out, fans customarily lost their minds until gradually, it became clear that all was not what it seemed. In keeping with the arch villain’s penchant for misdirection, it was soon revealed that it wasn’t Daniel Dumele under the mask, but rather comedian Hannibal Buress. Yet as opposed to responding with the quixotic anger that you’d expect for such a stunt, fans were happy to laugh it off. As much as it may seem like a double standard is at work, it’s important to note that this isn’t the first time that the man in the iron mask has diced with a case of mistaken identity.

MF Doom performs live in 2010 – PYMCA/Universal Images Group via Getty Images
Over the years, MF Doom has become a benchmark for underground hip-hop. Beloved by opportunistic hipsters that have glommed on to his persona and avid listeners who praise his unparalleled inventiveness, there are few artists that canonized in the same way as Victor Von DOOM. From working with Czarface, Madlib and Bishop Nehru to routinely churning out albums, beat tapes and everything else in between at an expeditious rate, there’s many reasons to cherish the creative mind behind that imposing disguise. Transitioning from an enlightened NYC rapper of the five-percenter mould during his days in the KMD to become a devious force of subversion in hip-hop, DOOM harbours the same ability to shake the fabric of our universe that his comic book counterpart has displayed in his innumerable battles with the Fantastic Four. But that’s not all they share.

Created by the mad scientist within his lab in Latveria, Victor Von Doom regularly sends replicas of himself in order to carry out his dirty work. Entrenched into the character’s lore, it has allowed many of his superhero adversaries to believe that they’d battled with or even slain the powerful villain. Yet time and time again, this smokescreen has allowed him to evade capture.

For DOOM, this same tactic has been employed with varying efficacy. Over the years, countless videos have surfaced of “fake” MF DOOMs playing in place of the husky-voiced architect behind such classic records as Operation Doomsday &MM… Food. In some cases, they get resoundingly booed offstage. In other instances, such as his 2012 DJ set in London, spawned articles that critiqued him for his duplicity. For the really lucky, the crowd’s audible backlash will lead DOOM to drop the charade and proceed to rock the mic.

Baffled by his behaviour, DOOM’s one-time touring companion and fellow underground king Talib Kweli felt the need to enquire about the ruse and the result was revelatory.

“MF Doom is the Andy Kaufman of hip-hop. He’s a supervillain,” Talib fittingly told Hannibal Buress during a 2017 podcast. “I asked him. I said ‘why sometimes you don’t come to the show?’ His answer to that question was ‘I don’t leave no money on the table. But sometimes it ain’t enough money so I send the impostor.’ I said listen, ‘isn’t that wrong?’ But his answer made perfect sense. He said ‘I’m the fucking supervillain. I’m not your friend. You don’t have to like me. You’re paying for the experience of dealing with a supervillain.’”

Known to possess one of the quickest wits in hip-hop, it’s not hard to imagine that this rationale truly governs DOOM’s decision-making process, particularly when it comes to the bag. As we know, this is a man that’s openly admitted that music isn’t a passion for him, but a vocation.

“I write rhymes and shit to get money. Other than that, I don’t listen to hip-hop music,” DOOM said to Spin. “I only do this for the simple fact of points-per-rhyme, the point game. It seems to be a profitable thing these days, and nobody else is really paying attention to it. You can be about your points, and if nobody else can do it, you can get some change off that joint, because you’re the only one doing it like that. That’s what I get out of the rhyming.”

For most artists, this sustained underhandedness and lack of quantifiable love for the artform would be the death knell for their career. But DOOM? He only seems to grow in acclaim.

Ultimately, that boils down to the fact that it’s keeping with his mythology in a way that no other MC could pull off. From his debut album under the guise onwards, DOOM has never been one to do things by-the-numbers. Remember, this is the artist that straight-face told the assembled audience at a Red Bull Music Academy event that there’s a “little rap beef starting” between DOOM and his other alias of Victor Vaughn in order to demonstrate the futility and pettiness of rivalries between rappers. Eventually going so far as to reprimand his girlfriend for cheating on Victor with DOOM during Madvillain’s soulful “Fancy Clown,” claiming “But have it your way, raw— no foreplay. That’s you if you want a dude who wear a mask all day.”

Openly duping fans may be frowned upon from an ethical standpoint, but it’d be a lot easier to revile if he wasn’t so persistently innovative, conjuring up luscious beats and forward-thinking rhyme schemes with inimitable ease. In doing so, DOOM has been afforded a rare trade-off between a prolific career in the studio and his dubious track record when it comes to the live arena– allowing him to waltz by on the merits of one element rather than the combined force of two.

And it’s in this exact vein that we get the most robust justification for why he enlists impostors. Taken from a 2009 interview with HipHopDX, DOOM suggests that the creative work he provides should supersede any one individual with such candour that it seems to not be emanating from the supervillain, but the real man behind the mask.

“I liken it to this: I’m a director as well as a writer,” he told the site. “I choose different characters; I choose their direction and where I want to put them. So, who I choose to put as the character is up to me. The character that I hired, he got paid for it. There’s no imposter…. When I go to a show, I’m going to hear the music. I’m not going to see no particular person…

Breaking from the traditional model, Daniel Dumele seems to suggest that his music can be enjoyed or even faithfully recited without any participation from the man himself, in the same away a classical composer’s work is passed down through the ages and revived by orchestras that harbour an appreciation for the material.

From his branding to the demeanour that he carries himself in, fandom of Victor Vaughn seems to come with an acceptance of his dastardly schemes, even if they happen to lighten your pocket. But for all other artists out there that might try and pull a fast one on their audience, don’t expect it to be greeted with the same understanding that’s afforded to the rapper that admitted to “plotting shows like robberies” on “One Beer.”