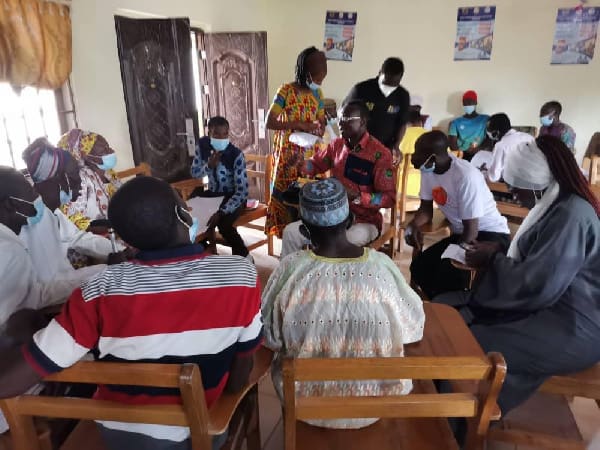 Youth Activists in the Wa East District of the Upper West Region have pledged to name and shame deviant characters in their communities to maintain peace.

They also pledged to eschew all forms of violence and uphold peace, tolerate views of others, dialogue among themselves for peaceful co-existence, cooperate with security agencies on crime prevention, help formulate by-laws towards peace, and endeavour to involve the women at all times in decision-making process, among others.

The Youth Activists made the pledge during an engagement with the National Commission for Civic Education (NCCE) in Funsi in the Wa East District of the Upper West Region on violent extremism and peaceful co-existence under the sponsorship of the European Union.

The meeting, which was on the theme: “Empowering Ghanaians to Stand for National Cohesion and inclusive Participation” was attended by 43 participants comprising 37 males and six females.

The aim was to equip the youth with relevant information on violent extremism and radicalism to guard against recruitment into violence.

Mr Luke Domelagr Wiedong, the Wa East District Director of the NCCE reminded the participants that, indiscipline amongst certain individuals and especially the youth groups was a threat to peaceful co-existence.

According to him, national cohesion required citizens to work together as a community and not on grounds of political affiliations, religious beliefs and ethnic groups.

He said, Article 41 (c) of the 1992 Constitution imposed on every Ghanaian, a civic responsibility to foster national unity and live in harmony with others.

Mr Wiedong, therefore, advised participants to stay away from violence and not allow themselves to be used as instruments for destruction.

Mr John Yirbile, the Deputy Upper West Regional Director of the NCCE, urged participants to give peace a chance by avoiding extremist groups and their activities that would disturb the peace and security of the district.

He noted that, peaceful co-existence was a shared responsibility and that all efforts should be made towards strengthening peacebuilding.

Speaking on preventing violent extremism in Ghana, Mr Esenam Adom, a representative of the District Police Commander, advised the youth not to accept engagements from self-seeking individuals to visit violence on innocent ones.

Mr Adom maintained that it was everybody’s responsibility to prevent violent extremism to pave way for peaceful co-existence.

He called on participants to report the activities of suspected characters or groups to the appropriate security agencies for action.

He also advised participants to be mindful of their utterances and choice of words since unguided statements could trigger violence.

Instead, he advised them to be law-abiding and be prepared to live in harmony with one another.

“We need to abide by the rules and regulations enshrined in the Constitution for peaceful co-existence” he noted.

Mr Adom called on participants to put in place community watchdog committees to support the Police in crime prevention.

Rev. Fr. Ambrose Kanguri, a Catholic Priest at the St. John’s Parish in Funsi, in a presentation on peacebuilding mechanisms, noted that the youth should be actively involved in conflict resolution in their respective locations.

He said the objectives and activities of any mechanism in the peacebuilding process should clearly be outlined and advised participants to adopt non-violent means in addressing their grievances.

He observed that the promotion of inter-tribal marriages and constant inter-party dialogue was necessary mechanisms in peace-building.

Everything is impossible until you take the steps to make it possible, be positive in every step you make. Nature will definitely give you the smoothest part of life. Email us on [email protected] Whatsapp: +233540577992
@HiplifeHiphop
Previous Andrew Dice Clay Refuses To Cancel Shows Despite Bell’s Palsy Diagnosis
Next Speaker Bagbin launches second edition of Inter Schools Public Speaking Competition