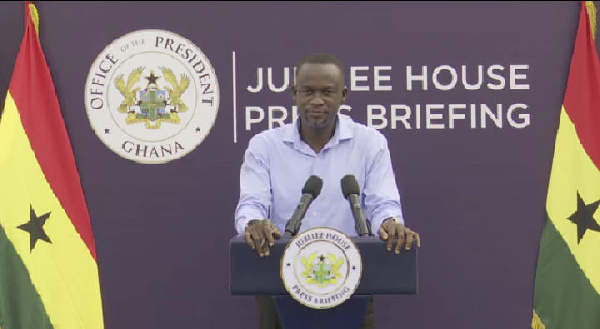 Eugene Arhin, Director of Communications at the Presidency, has indicated that Samuel Okudzeto Ablakwa has peddled falsehood with his allegation that President Nana Addo Dankwa Akufo-Addo travelled with a luxurious aircraft on his recent trip abroad.

Speaking to the media at the Jubilee House on September 27, Arhin said President Akufo-Addo on his recent trip to the global education summit in the UK and G20 compact with Africa summit did not use the LX-DIO Boeing aircraft as put out by Samuel Okudzeto Ablakwa.

The MP and Ranking Member on Parliament’s Committee on Foreign Affairs had earlier stated in a write up on his Facebook timeline that he will be demanding full disclosure of President Nana Addo Dankwa Akufo-Addo’s foreign travels in a yet to be filed urgent question in Parliament.

According to him, when President Akufo-Addo was travelling to the UK and Germany for the global education summit and G20 Compact with Africa summits respectively, he used ultra-luxury aircraft, LX-DIO Boeing operated by Global Jet Luxembourg.

He said this same aircraft was used by the President to the 76th session of the UN General Assembly in the United States.

Ablakwa in his September 21 post stated, “A presidential spokesman should not be desecrating what is expected to be hallowed precincts of the seat of government in this Goebbelian manner.

“I can authoritatively confirm without a scintilla of doubt or any equivocation for that matter that President Akufo-Addo on his current trip to the United States of America has again chartered the same ultra-luxury aircraft he used to the UK and Germany — the Luxembourg-based luxury jet registered LX-DIO and operated by Global Jet Luxembourg. Same Boeing 737-900ER BBJ3 with Manufacturer Serial Number (MSN) 62515 and Line Number 5659.”

Responding to the MP’s claim, Eugene Arhin said, “Member of Parliament for North Tongu had peddled falsehood when he indicated that, the President on July 28 when he went to the Global Education summit in the UK had used the LX-DIO Boeing aircraft, he again said the President sometime in August when he went for the G20 Compact with Africa summit had used this same LX-DIO aircraft and I still maintain my position that the MP peddled falsehood. In his statement that he put out recently, if indeed he claimed I peddled falsehood, I’m sure he would have put out the evidence indicating the President had used these particular jets on these particular days, of course, he didn’t. He didn’t because there is no such evidence.”

He argues while the President was attending the UK summit, the aircraft in question was parked at a Paris airport.

He again stated that when the President was at the G20 summit in Germany, the aircraft had been rented for a 15-day round trip by a different African President, which mean it could not be the President for the Republic of Ghana.

“Let me put on record that, on July 28, when the President attended the Global Education summit in the UK; you can do your own checks and if you think I’m peddling falsehood, you can expose me. Take a phone and call the company that operates that particular jet and ask them, for example on July 28, where was that jet and they will tell you that on July 28, during the entire period of the global education summit for three days LX-DIO was parked at the Paris-Le Bourget Airport…and was nowhere in the UK that is being insinuated by the MP.

“Again, you do your checks again, call the company and ask them on August 28, while the President was in Germany for the G20 Compact with Africa summit, where was that particular aircraft and they will tell you that within that period, they had been rented for 15 days by another African president; that president embarked on a round trip to Belgium, Germany, the far East and to the Middle East, 15 days continuously. All of us know that in the cause of this year, the president has not embarked on any such trip so, again, one would ask where did the North Tongu MP get his information from?” Eugene Arhin quizzed.

“Obviously – to use his own words – he peddled naked untruth and if there is somebody who had to apologise to the people of Ghana for peddling such falsehoods and such untruths, it’s definitely him. If he says he has contrary evidence to what I’m saying…he should put it out, I have put mine out,” he challenged the MP for North Tongu.

Everything is impossible until you take the steps to make it possible, be positive in every step you make. Nature will definitely give you the smoothest part of life. Email us on [email protected] Whatsapp: +233540577992
@HiplifeHiphop
Previous IGP must release J. B. Danquah, Suale murder reports or face protests – Journalist
Next MMDCEs: Show your disappointment but don’t be violent – Yaw Buaben Asamoa urges