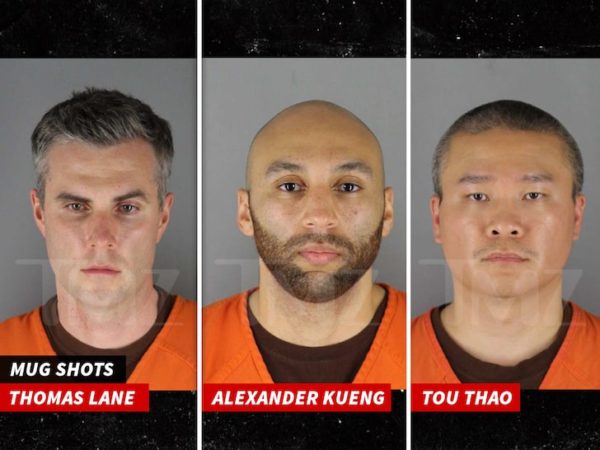 [Via]
Thomas Lane, J. Alexander Keung and Tou Thao have now been charged in connection to George Floyd’s death.
The former officers involved in George Floyd’s murder have been officially charges for their connection to his death. The Attorney General made the announcement today, along with elevating Derek Chauvin’s charge to second-degree murder. Though it’s only the first step, it’s a promising one, at least in the way that politicians and government officials are dealing with Floyd’s death in Minnesota.TMZ has officially reported that their mugshots are in. The mugshots of the three officers, a teary-eyed Thomas Lane, J. Alexander Kueng and Tou Thao, surfaced online earlier today. Along with that, the tabloid publication revealed that the bail for all three of them is set at $1M. It’s a major step forward for justice for George Floyd and his family, though we’ll have to hope that the conviction will be made for their crimes.

#TSRUpdatez: The mugshots for all the officers involved in #GeorgeFloyd’s death have been released #JusticeForGeorgeFloyd

The three officers were taken into custody and charged with aiding and abetting second-degree murder and aiding and abetting manslaughter — all felony charges. Each of them are now facing 40 years each for the murder of George Floyd, though it’s unlikely they will be punished with the max. sentence.

Also Check:   Floyd Mayweather hints that he’s heading to Ghana for the Year of Return

AG Ellison made it clear that he’s making sure that the case against all four officers is as strong as possible, asking the public to be patient while adding that a conviction would be “will be hard.”

Everything is impossible until you take the steps to make it possible, be positive in every step you make. Nature will definitely give you the smoothest part of life. Email us on [email protected] Whatsapp: +233540577992
@HiplifeHiphop
Previous Obibini  Get A Life (Prod. By kofem)
Next Dave East – Menace