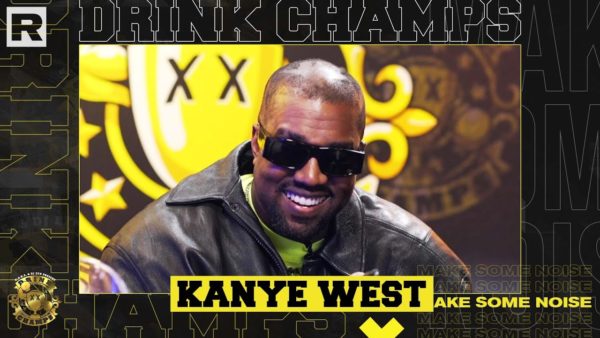 Ye spoke about his feud with Drake, rumors that the rapper had an affair with his wife Kim Kardashian, and more on “Drink Champs.”

Kanye West doesn’t just make some of the best music, sneakers, and clothes in the world — he can also be heavily counted on to deliver some of the greatest celebrity interviews. On Thursday, it was announced that the Chicago-raised music legend, who recently changed his name to simply Ye, would be appearing on the Drink Champs podcast with N.O.R.E. and DJ EFN. He came through with one of their best interviews to date, speaking on his marriage to Kim Kardashian, his new album DONDA, his feud with Drake, why signing Big Sean was the “worst thing” he’s ever done, and much more.

Throughout the interview, Kanye had a lot to say about Drake. Most interestingly, he talked about how Drake’s levels of getting under his skin are so advanced, referencing the rapper moving down the street from him and allegedly messaging his wife and all of her friends.

“When people went to go get Hitler, they didn’t go straight for Hitler, they set up fake tanks, they set up this and that, so [Drake] is gonna do stuff like live five blocks down the street from you, he gonna DM every single girl in your family, every single girl around your family, all your n***as’ girls, it’s like away games and home games,” said Ye, likening their beef to the NBA. “This is professional rap. This is the first time we in a place of, like, professional rap. So if he throws out a bar right here, it might be a bar, like what ‘Pac said, you and I know what’s going on but it’s all psychological.”

Ye also spoke on a hypothetical Verzuz battle against Drake, saying that he would destroy the Toronto representative.

He also touched on the wild rumors that Drake was intimate with his wife, Kim Kardashian, telling the hosts that Drake would allegedly play games with his family to make it seem as though he and Kim had sex.

“Drake is like, ‘You know, I never fucked Kim.’ But I was like, ‘But you acted like you did. You got bars that’s like, ‘Hidden Hills, give your wife the chills,’ it’s like somebody is throwing a marble and hiding their hand or something,” said Ye. “All that’s disrespectful. [It’s] to the point that Kim is like, ‘I don’t listen to this n***a anymore. This n***a acting like he fucked,’ and we never really had that conversation. ‘Oh, I never fucked Kim.’ No, but what about, did you ever DM her? Everything else around it ’cause it ain’t about just the actual act of it.”

This is one of Kanye’s most explosive interviews in a while, and if you’re a fan, you’ll be doing yourself a favor by pressing play. Check out a few specific clips below, as well as the full interview.

Everything is impossible until you take the steps to make it possible, be positive in every step you make. Nature will definitely give you the smoothest part of life. Email us on [email protected] Whatsapp: +233540577992
@HiplifeHiphop
Previous Jay-Z Calls Kanye West’s Comments About “The Blueprint” & Just Blaze “Unfair”
Next 2 Chainz – Sofa Ft Wiz Khalifa