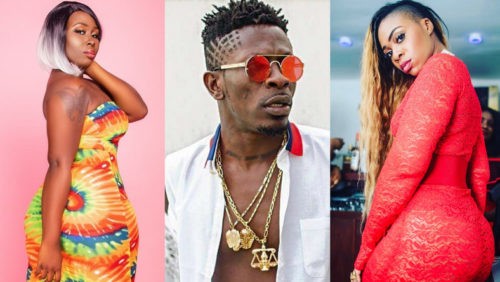 Do you recall the curvaceous emerging singer and nudist who said she had an affair with Dancehall act, Shatta Wale even though he was still with Michy?

Her real name is Souad Baaba Andoh, but widely known as Goddess Ginger. She did not mince words at all when she told blogger Kobby Kyei that she had fun with Shatta Wale who equally paid her well anytime they had sekz.

In a fresh interview , Ginger Goddess said Shatta Wale is very good in bed and banged very well to her satisfaction. Although she has ended his association with him mutually, he claims he’s yet to meet any other man who bangs like the way he does.

“You can’t put Junior [Shatta Wale] on a scale,” “I’m yet to meet a man in Ghana or outside the country that’s way better than Junior.”

She continued: “Who f**ks for two minutes? Who does that? Is the person sick or tired? He goes for hours. I think the least he has ever gone is an hour and a half.”

On his favourite sex position, Goddess revealed that he enjoys spooning – a form of a rear-entry position, the other being the doggy style position.

“His favourite sex position is spooning,” she revealed. “He always wanted to be on the side with my big thigh on him.”