Lizzo Shoots Her Shot At DaBaby After His Nudes Allegedly Leak 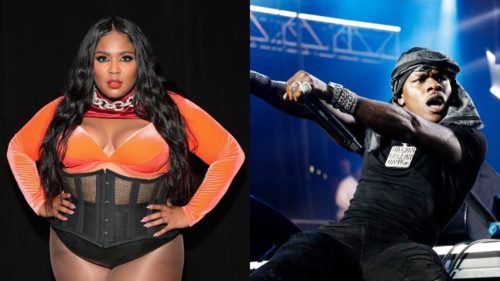 Lizzo liked what she saw.

Twitter woke up to a big surprise on Sunday morning. DaBaby’s nudes had somehow made it onto people’s timelines, leaving viewers either stunned, aroused or insecure. Although DaBaby tried to shut down the accusations by asserting that he doesn’t even send nudes, the online conversation is still treating the video as if it came courtesy of the Charlotte rapper.

Lizzo is among the faction of people that found themselves turned on by the leaked footage and she decided to do something about that. The breakout star is not one to hide her desires, as was shown when she thirsted over Karl-Anthony Towns at a Lakers game recently. On Saturday – which happened to be DaBaby’s birthday – he posted a video of a concert performance on his Instagram. While the post was entirely unrelated to his nudes, Lizzo wrote in the comments: “Hey big head.. [eyes emoji].” We all know the flirtatious connotation of this remark, which explains why it has attracted a ton of likes.

While Lizzo’s lusting over DaBaby may not prove fruitful, she did get the chance to grind with him onstage at Made In America Festival this year when they performed the “Truth Hurts” remix together.