RE: No court has cleared Rockson Bukari, others involved in Shaanxi bribery case

Which court has exonerated Rockson Bukari, a former Minister of State at the Presidency? Was he among the accused persons the police took to court unprepared? I have attached a court document here showing the names of the accused persons being Charles Taleog Ndanbon, Maxwell Wooma and Suwaid Abdul-Mumin. The public has the tapes of how he attempted to influence me to cover up the dark secrets of a senior High Court Judge, Justice Jacob Boon, and the Chinese-owned Shaanxi Mining Company Limited.

He urged me on the first tape to kill the story with a promise to arrange something for me; then, on the second tape he said he had taken a cash of five thousand Ghana cedis (868.27 United States dollars) from the Shaanxi Mining Ghana Limited for me and said I should feel free to “chop” it. After the tapes came out, Rockson Bukari resigned, admitting in his own resignation letter that he was “indiscreet” and he resigned as “a matter of principle”. That letter can be found online. Charles Taleog Ndanbon also met with me inside an STC yard in Bolgatanga and a gave me a brand-new motorbike as he pressed me to cover up an impeding story about the ex-parte visits to Justice Boon. I recorded the conversation and you (the public) would hear him clearly telling me to take the motorbike to kill the story. I never requested any motorbike from Charles or anybody. It is clear on the tape the purpose for which he gave me the motorbike. I received all these items for evidential purposes and took them to the Bureau of National Investigations.

From there, the police took only three people to court , excluding Rockson Bukari and some other powerful figures. I was invited as a witness. My participation was limited in the court trial because it was not my case. It was the Republic versus the only three accused persons. I did not even appear there with a lawyer. The tapes I submitted were not even played in court up to the day the court ruled that the case would not continue because I was not a public officer. The three were acquitted and discharged because I was not a public officer. 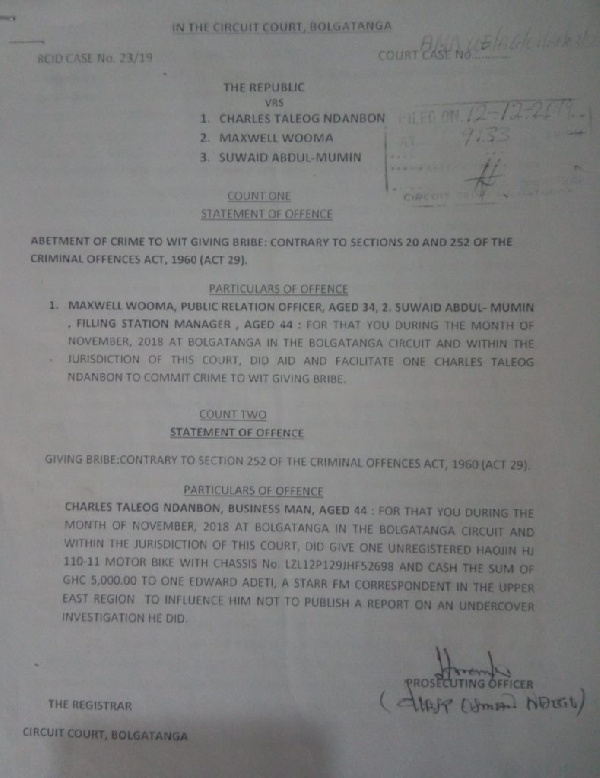 Justice Boon recused himself from a case because of those secret meetings I uncovered and Rockson Bukari resigned because he wanted me to cover the rot. Granted that the three accused persons were asked to go back home because I was not a public officer, Rockson Bukari was not even brought to court with the other big names he mentioned to me on the tapes which the public has heard so loud and so clear. But now a media house has deliberately put out fake news. People already were angry. Now the flames are even more intense. If your fake news leads to any fatal attack on me or my family, the world knows which media houses and which reporters to blame for my blood. I still stand by my report. They gave me the items to block the public from knowing about the dark secrets. If the Shaanxi officials did not visit Justice Boon, help me ask Justice Boon why he recused himself after my findings were disclosed to him? If Rockson Bukari’s intervention on behalf of the judge and Shaanxi was not wrong and against the conduct of the public officer that he was at the time, why did he admit in that resignation letter that he was “indiscreet”? and that what he did was against principle? Ask them. And ask my colleagues who want me dead because of ulterior interests. I stand by the report. They attempted to influence me as captured on the tapes but it did not work because I still exposed them in December 2018 in an online report captioned “Judge recuses himself as Shaanxi officials attempt to bribe journalist”. I’m not surprised because the GJA chairman in Upper East, Eric Amoh, has said in a shocking video clip that the “powers behind Shaanxi” are stronger than our community. I have that video. Naked injustice! Naked rot!

No court has cleared Rockson and the big names. I am Edward, not a coward. The court asked me to take the items they brought to me to kill a story of public interest. I maintain that the items will go to the neglected needy including the deprived schoolchildren in the same Talensi District where Shaanxi has been operating since 2008. This deadly fake news means I will relocate my family once again temporarily whilst I stay behind. The media killing their own because of what?

Young Blackboi Amg Napiboi is an experienced Public Relations Officer and Author with a demonstrated history of working in the music industry. Notable among his huge repertoire of artistes worked with are Morgan Heritage (Grammy Winners), Rocky Dawuni (Grammy Nominee, 2015), Samini (MOBO Winner - 2006, MTV Awards Africa Winner - 2009) and Stonebwoy (BET Best African Act Winner - 2015). Other mainstream artistes of great repute he has worked with are EL, Eshun, Kula, (just to name a few), who have all won multiple awards under Vodafone GHANA Music Awards (VGMAs).
Previous We’ll vote for you to pay us – Assembly members to Mahama
Next Tema NCCE Director calls for seizure of selling, preaching on buses