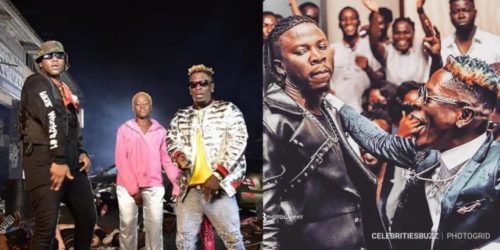 The real man of the moment and African Dancehall King, Shatta Wale has finally decided on which show to grace tonight as two of Ghana’s finest artistes, Medikal and Stonebwoy are hosting their Concerts separately.

Stonebwoy is blessing the street with ‘Ashaiman To Da World‘ Concert. He organized a free health screening yesterday as a warm-up to make history tonight.

On the other hand, Arab Money Gang’s frontier, Medikal is also hosting his first-ever Concert at his hometown dubbed ‘Welcome To Sowutuom‘.

Many people are in high anticipation of whose show exactly Shatta Wale will be repping.

As a matter of fact, Celebrities Buzz has gotten a perfect answer to that.

Shatta Wale might be paying off Stonebwoy after the latter also failed to show up at his Reign Concert weeks behind due to some seemingly fake knee problem.

Per post spotted on the social media handle ofAMG Vimboy, he will be repping Medikal’s Concert to the fullest.

He could, however, pass by Stonebwoy’s if he is not stressed up after his performance at his son’s show.