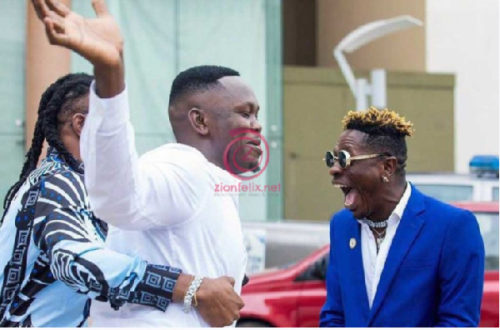 For the first time in a long while, popular Ghanaian musician, Shatta Wale, and Stonebwoy’s former manager, Blakk Cedi met publicly at D-Black’s Club Onyx Thursday, December, 31 when the ‘New Year’s Eve aka NYE’ Party was going on.

Even though there was this perception that there is some bad blood between the two because of the few disagreements they had when Blakk Cedi and Stonebwoy worked together, their meeting last night painted a totally different picture.

A video of the two seen online shows that their relationship might not be that tight but they certainly don’t have any problems as colleagues in the entertainment industry.

The everyday Shatta Wale was seen happily shaking and giving Blakk Cedi a warm embrace as he whispered into his ears.

Blakk Cedi also responded to Shatta’s action in a similar way and everyone that surrounded them enjoyed the scene.