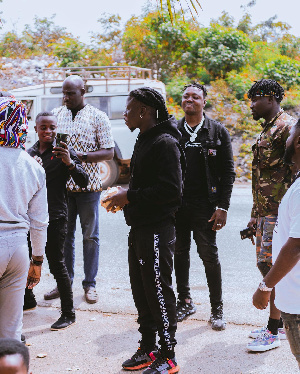 It has emerged that celebrated dancehall artiste Stonebwoy escaped a near-fatal accident on Saturday, January 2, 2021.

But a member of Stonebwoy’s team Kwame Agyemang Berko has debunked those reports, explaining that the security personnel rather handed over the driver to the police.

He clarified that the Stonebwoy’s convoy collided with the overspeeding vehicle as the driver was trying to overtake them.

He said the incident culminated in two of the security guards sustaining injuries but Stonebwoy escaped unscathed.

The security guards then handed over the driver to the police. While this was ongoing, Stonebwoy, according to Agyemang Berko left for Accra to perform at the “2 Kings Live In Concert” at the Bayview Village with the legendary Amakye Dede and Kwadwo Antwi.

Also Check:   Stonebwoy cried on stage after he remembers his late mother

“A lot of things have been said in the media but we thank God Stonebwoy and the team are alive and doing well after the accident. The driver was not attacked and the incident has been reported to the police so we will leave them to handle it”, he told the press.

Meanwhile, Stonebwoy’s wife has expressed gratitude to God for protecting his husband and his team from danger.

In a short post on social media, Doctor Louisa said “Thank You Lord”