VIDEO: See What A Lady Was Caught Doing Under Hijab

A video of a lady, wearing Hijab on her school uniform and a boy (also on school uniform), who entered the lady’s room through window, has surfaced online and going viral.

In the video, it was clear that, the girl was waiting for the boy’s arrival as she hurriedly closed the window after the boy entered. 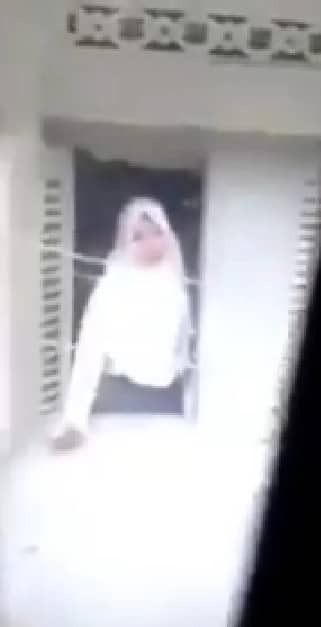 As seen in the video, the duo were still in their school uniform which suggest, the incident must have occured, during or immediately after the school hour.

This is a disturbing video for parents, guardians, spiritual leaders, society and political leaders as well.

The sexual and sexuality acts kids of today practice is worrisome. Some secondary school girls has done more abortion than the sx workers you see around.

Some teenage boys have sex more often than their father’s yet, most parents are not aware of this.

Please, make a deliberate efforts to be close to your children especially, the teens. Know what they do, study their moods and behaviour, know the type of friends they keep and above all, be the friend they can talk to, be their confidant not just their parents.

May we not have any regret over our children and wards.

Previous HOT VIDEO: Two Lesbians Caught Chopping Themselves
Next VIDEO: Man Dies At A Hotel After Sleeping With A Hookup Girl