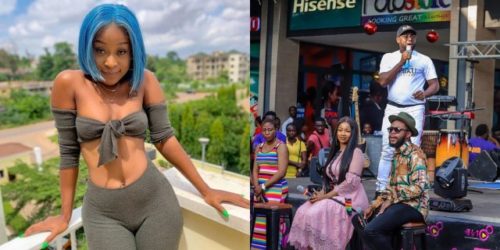 Beautiful media personnel and Actress, Efia Odo has subtly fired some shots at Ghanaians for worshipping strangers at the expense of their very own people.

The tweet according to most of her fans is a clear jab to BBNaija Housemate who is currently in Ghana, Tacha.

Tacha has been in Ghana for exactly 2 days now. She will be around till the 2nd day of December 2019. She was brought down by Despite Media prior to her homecoming.

She partied at Club Onyx a few hours ago alongside Hajia4real and DBlack.

Big Brother Naija 2019 reality show is over but her fans are finding ways to stay in touch with their star.

Fans of Big Brother Naija star and most trended celebrity in Nigeria Tacha, have these force behind her called Titans. These titans have composed their own anthem for her, pledging to be loyal to her any day.

Upon arrival, she was mobbed by some happy fans.

She was also carried in a Limousine to tour some part of Accra.

Efia Odo seems unhappy with the move and as a result, took to Twitter to fire Ghanaians by writing;

“Ghanaians will always worship outsiders before they worship their own.”

Below were some few comments gathered;

‘am not sure ebi Tacha own u dey talk about…if that deaa u know try koraa…cos we all are Africans…u forgt how dey treat Shatta bundle and Mr.eventuary…we all one
GhanaNaija’

‘Like how people are fanfooling Abt #Tacha. The things we focus on in this country tells us how sick we are .’

‘Dat gal is a Ghanaian too so let’s stop dis’

‘You guys should stop fooling yourself
She is Nigerian
Where does her mom come from??
Why haven’t they taken her to see her mom’s family???’

‘Is it even about Nationality? How can we be celebrating someone who just won a reality show in somewhere oo and we acting as if her visit here is going to turn our lives n economy around. Will the Nigerians themselves grant her all this audience ahh’

READ ALSO:  Sarkodie step out with his beautiful wife Tracy in style