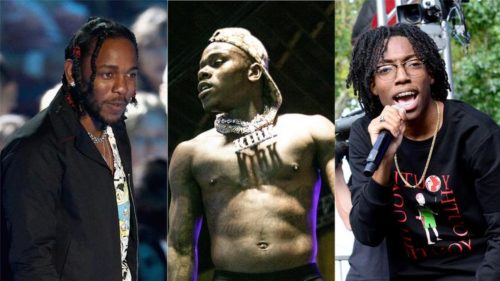 When you think of hip-hop centric festivals, Rolling Loud is really the only one that pops. Of course, the first year of Day N Vegas brought a solid line-up to the table but consistency is key when it comes to organizing an annual event. We’re excited to see how they follow up on the success of this year’s show, hopefully bringing an even stronger list of musical acts next year. When it comes to the representation of rap music at festivals overseas, one European party stands out among the rest: WOO HAH! Festival. For the past few years, the Netherlands-based event has brought some of the biggest rappers to the center stage and this year is no different.
Also Check:   Counselor Lutterodt reacts to rumors of wife packing out of his house

Announcing their 2020 line-up in several different tiers, the first batch of artists was revealed today and, oh man, it’s already looking like a must-see. Headlining the festival will be none other than Kendrick Lamar, who we’re hoping has some new material to perform by the time this takes place. His support throughout the day is composed of Ski Mask the Slump God, DaBaby, Lil Keed, Lil Tecca, EarthGang, A$AP Ferg, Santi, and many more.

Expect even more surprises with the upcoming WOO HAH! Festival line-up reveals. The announcements are not finished and, judging from past years, it’s only set to get better.