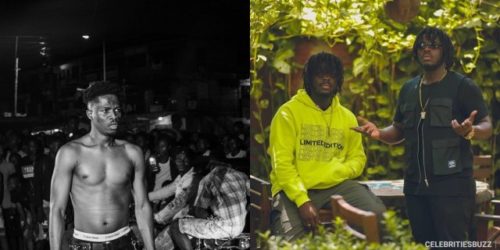 There was no mention of Kwesi Arthur’s name in the song. However, the descriptions framed in the form of lyrical bars clearly points to the fact that it is a diss to Award-Winning, Kwesi Arthur.

According to sources, an incident that happened at the SRC Night of Ghana Telecom University is said to have triggered the beef between these artistes.

A source revealed that during the night of the performance, DopeNation was obstructed by one of Kwesi Arthur’s team members and hence their microphone was taken from them and handed over to Kwesi Arthur.

Also Check:   We became Producers out of frustration – DopeNation

In the song, DopeNation said Kwesi Arthur cannot stand anyone of they two in a lyrical battle because he is not talented than them.

They also said he is being showed love by the street because of sympathy and not because he has got vibes.

As if that wasn’t enough, DopeNation added that Kwesi Arthur has not been able to live up to the hype Medikal gave him on his ‘Grind Day Remix’ song.

They unleashed some more hard bars on Kwesi Arthur which questions the latter’s street credibility.

Definitely, if Kwesi Arthur fails to reply back with a heavier bar, the Sarkodie-M.anifest or Strongman-Medikal fate will be repeated.

@Rexkrampa
Previous ‘How can you be hailing Tacha with body odor & bad manners in Ghana?’ – Ibrah One blast Ghanaians
Next Kuame Eugene Reveals The Only Reason Nigeria Artists Are Ahead Of Their Ghanaian Counterparts