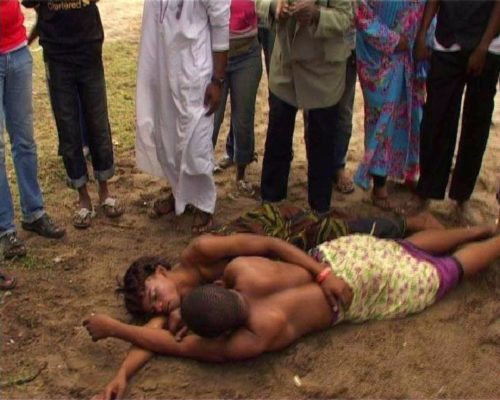 The man had travelled from his village to meet his adulterous partner in her husband’s home when the latter was away.

Drama ensued at Amokwe village in Oduma, Aninri local government area of Nigeria’s Enugu state when a married woman was allegedly caught having sex in her matrimonial bed with her ex-lover who is equally a married man.

Both adulterous ex-lovers were stripped naked, beaten and paraded in the entire community.

Media reports from Nigeria suggest that the man had travelled from his village to meet his adulterous partner in her husband’s home when the latter was away.

However, some suspicious neighbours notified him about the wife’s weird reception of the former lover into her matrimonial home, thus he returned only to catch them red-handed having sex in his bed.

Out of anger, the man tried to cut off the rival’s manhood, but neighbours intervened and restrained him.

Also Check:   Lady bribes her boyfriend’s friend who caught her cheating with a sugar-daddy with $15,000 to shut-up

Community leaders who considered the abominable act as unprecedented in their area did not spare them, as they paraded both of them naked amidst beatings and booing.

While parading them, the errant man was made to carry the wedding photos of his errant partner to display to the entire community, ostensibly to suggest that they both knew they were committing adultery.