Prince Gold runs a mobile pantry to feed the homeless. 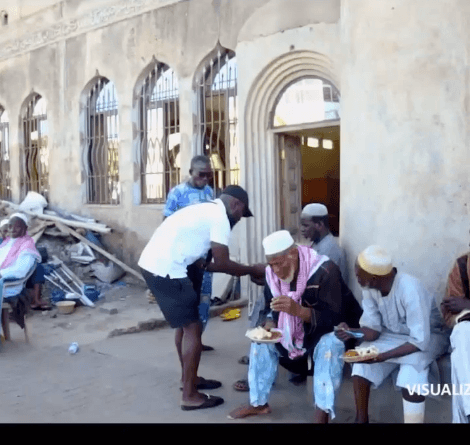 Goldlines Entertainment CEO, Prince Gold started a mobile food pantry four years ago and his volunteer creew feeds up to 150 people in a week across Accra at a time when the capital’s homeless population is the highest since the great depression. Other groups, including the coalition of the homeless run similar mobile pantries. But Prince is virtually operating on his own.

The first time he saw people sleeping on the streets of circle he cried, he recalled. “I got impacted” said Prince. “It stayed in my heart”

On a recently chilly fall night, Prince pulled up beside Odartey, who was walking around the streets of Ashaiman. “Hey do you want some soup?’ asked volunteer Felix, as he stepped out of the rickety van, which is emblazoned with the words “Food for the Homeless” and “Volunteers in Action”

They all chip in for fuel which costs about $100 a week. Their morning usually starts at exactly 9am when the van departs from Luxury Apartments at East Legon in Accra. After a stop to fill the fuel tank, the volunteers set off at 9:30 a.m. for their first stop — a homeless shelter near Hunts Point where people sleep instead chairs.
More than 30 people line up for fried rice and chicken when Prince’s team arrives.

“We thank God for food,” said Lamptey, who was staying at the shelter that Monday morning.

Prince and his crew end each week’s run around 2 p.m. at a Dunkin’ Donuts, where they refuel and reflect.

“God puts people in his way,” said Don Kalakala, Prince’s personal assistant from Sowutuom who has been helping Prince for the past years along with his brother, DJ Azonto.

Anyone wishing to help Prince Gold and his mobile food kitchen crew may email clintonofori968@gmail.com or call/WhatsApp us on +233557466968 for more information.

Watch the video below as Prince Gold and his team feed the homeless.