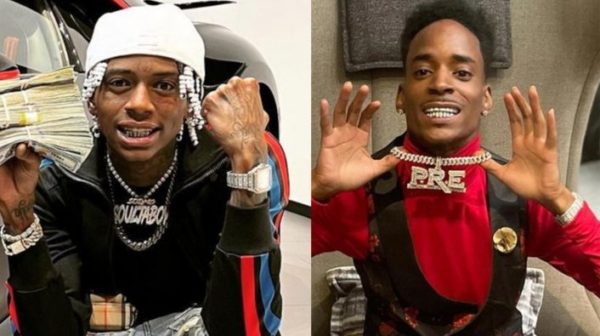 Soulja Boy was engaged in a heated situation that played out on social media with Young Dolph before his tragic death, and Soulja Boy has been receiving backlash online for not addressing Dolph’s passing. Soulja Boy later addressed Dolph’s passing on Instagram Live, and he told viewers that if the roles were reversed, he believes that people would be making fun of him.

Young Dolph’s artist, Snupe Bandz, took to Instagram to call Soulja Boy a “Clout chasing b*tch,” and he shared alleged DMs between him and Soulja Boy. In the messages, Soulja Boy told Snupe, “Sorry to hear bout yo big homie. Cut all dis sh*t out. It’s uncalled for. This my last time saying it. Like I said I F*** wit y’all Boys idk where all dis lame Sh*t come from. Y’all n***az couldn’t take a f**king joke bruh. Who gives a damn if y’all signed to empire wtf.”

Soulja Boy then added, “I’m done trolling wit y’all N***az I was done before that Sh*t even happen. But if y’all keep coming for Me we not standing down. I’m sorry to hear bout da sh*t I truly am. But y’all needa chill fr. Y’all put me in a weird ass position. And y’all gotta stand on that. U think I don’t wanna say rip dolph but how can when y’all N***az keep threatening me. Y’all N***az stupid.”

Soulja Boy was quick to respond to Snupe Bandz posting the DMs, and he declared “war forever” on Paper Route Empire. You can check out the back and forth above.

Everything is impossible until you take the steps to make it possible, be positive in every step you make. Nature will definitely give you the smoothest part of life. Email us on [email protected] Whatsapp: +233540577992
@HiplifeHiphop
Previous Shatta Wale – Why Always Me Ft Medikal
Next Fabolous & Dave East Ft Snoop Dogg – Make Some Money