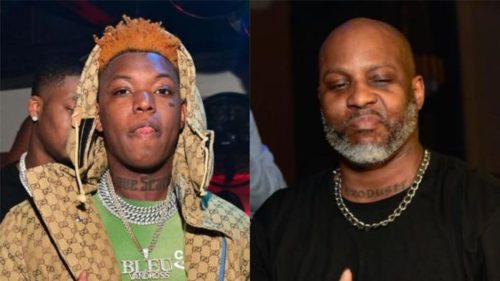 Yung Bleu shared his messages with DMX, confirming that the two have a collaboration releasing soon.

As the world continues to pray for DMX’s recovery, another misinformation scare happened on Thursday night after comedian Luenell falsely claimed that the legendary rapper had been taken off of life support. The news was quickly corrected by DMX’s manager Steve Rifkind, who released a video statement confirming that the rapper remained on life support and was still alive.

We’re all anxious to find out the latest updates on DMX’s condition, and last night’s scare prompted many to share premature “RIP DMX” messages on social media, which actually ended up trending for a few hours on Twitter. Alabama rapper Yung Bleu posted his own message on Instagram, praying that the rumors weren’t true and revealing that he was recently in contact with Dark Man X to collaborate on Bleu’s upcoming album.

Posting a log of their DMs on Instagram, Yung Bleu wrote, “HOPE ITS NOT TRUE ! I Hope I don’t GOT one of THE LAST DMX FEATUREs. I was gonna suprise [sic] the world with it on my album f*ck. I don’t no if the news true but I’m praying for you Og. F*ck the music! I’m praying for you as the person as the father as the legend!”

The post was deleted after DMX’s manager released a statement confirming the rapper was still alive. Many are criticizing Yung Bleu for the timing of this message, calling him out for allegedly clout-chasing on the situation. “Weird way to try and get hype for your single,” wrote a commenter after the messages were reposted by DJ Akademiks.

Do you think it was corny for Yung Bleu to announce the song now?

Everything is impossible until you take the steps to make it possible, be positive in every step you make. Nature will definitely give you the smoothest part of life. Email us on [email protected] Whatsapp: +233540577992
@HiplifeHiphop
Previous Timbaland Reflects On DMX: “It Made Me Think About Aaliyah”
Next Lil Eazzyy – Hunnid or Better Feat. Bizzy Banks