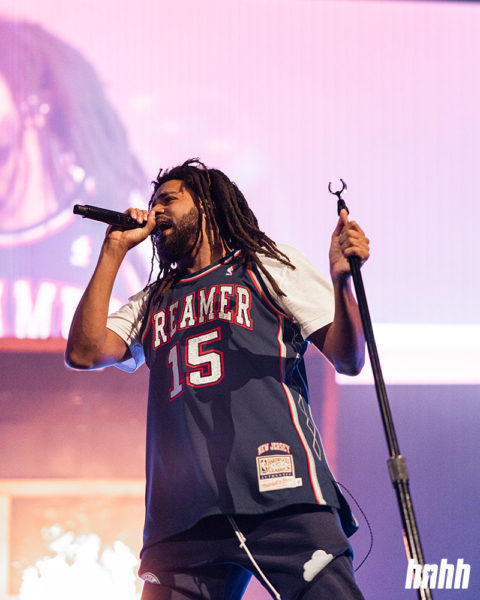 Rapper J. Cole and influencer Brittany Renner crossed paths this weekend at Rolling Loud New York, but it appears as though the North Carolina native didn’t know exactly whom he was speaking with. Right after he got off stage from his headlining performance at the hip-hop festival this weekend, he was approached by Renner, who was seemingly conducting interviews backstage.

“Can we get an interview for Rolling Loud? No?” asked Renner as J. Cole walked by her in the backstage area. The rapper had a delayed reaction, but he eventually stopped and gave her a few seconds of his time.

“You’re a f*cking legend, you know that, right?” asked Renner.

That was the extent of their conversation, but Renner said the moment was “legendary” for her.

This comes following her appearance on DJ Akademiks’ new podcast Off The Record this week, where she addressed a controversy that she “trapped” NBA baller PJ Washington after having a kid with him. They broke up shortly after she gave birth, but according to her, PJ was the one that wanted to have a baby.

Check out her exchange with J. Cole below, and let us know if you think Cole knew who she was.

Everything is impossible until you take the steps to make it possible, be positive in every step you make. Nature will definitely give you the smoothest part of life. Email us on [email protected] Whatsapp: +233540577992
@HiplifeHiphop
Previous Papoose Ft Lil Wayne – Thought I Was Gonna Stop (Official Video)
Next Shatta Wale – Jail Man (Prod. By Beatz Vampire)