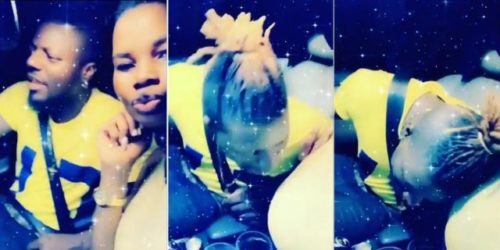 The pair while riding together were spotted smooching each other in a very superb and amazing way.

Pope Skinny, CEO of the Asuoden Empire placed his head on the b00bs of Pamela while describing how well he will ‘Chop’ the top-shatta chick.

Pope was banging loud his ‘Hot Cake’ song featuring Shatta Wale, a song that subtly touched on the ‘keche’ he will display on Pamela.

Amazingly, Pamela Odame seemed to have been enjoying Pope’s company and how he was using his head to massage his front goods.

We can’t fathom however if indeed Pope Skinny practiced what he preached.

@Rexkrampa
Previous ‘I can’t marry beauty, I will marry brains that can help me make money’ – Shatta Wale
Next ‘You Are Also Promoting Prostitution With Your Style Of Dressing’ -Social Media Users BlastsvJoselyn Dumas For Attacking Mmebusem