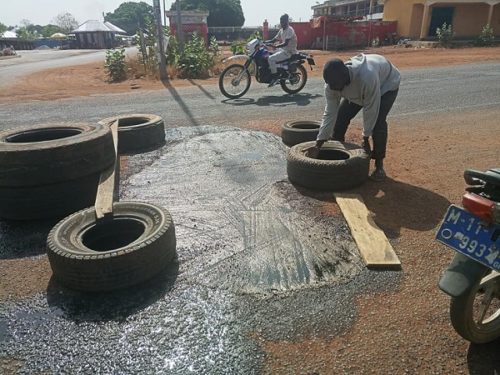 A Wa-based vulcanizer has won admiration from Ghanaians after news of his patriotic work hit social media.

The vulcanizer, after realising that large potholes on the Wa to Kumasi highway was an eyesore, decided to remedy the situation.

Using his own resources, the vulcanizer has started a project to patch up these potholes.

According to a Facebook post by W93.5FM, the man has managed to provide bags of cement, stones, and other materials to make concrete for fill the potholes.

Sharing photos of the man’s work, W93.5FM wrote: “A vulcanizer in the Wa Municipality has initiated a project to cover potholes along the Wa Kumasi road.

The vulcanizer through his own initiative bought bags of cement, stones, water etc which they used to prepare concrete for the purpose.”

The vulcanizer’s gesture has earned him massive praise from social media users.