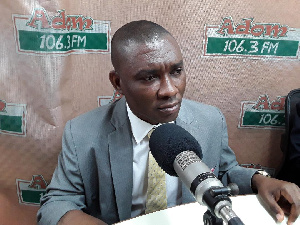 The Member of Parliament for Tarkwa Nsuaem, Goerge Mireku Duker, has assured residents that measures are underway to fix the deplorable Tarkwa to Takoradi road.

According to him, the Finance Ministry and other stakeholders have been meeting to set out modalities for the use of mining revenue from companies to develop road infrastructure there.

The people of Tarkwa-Nsuem in April this year, embarked on a 12-hour violent protest to draw the government’s attention to the poor state of the Tarkwa to Takoradi road.

However, the protest and subsequent appeals have not yielded any results.

But the Tarkwa Nsueam MP, Goerge Mireku Goerge assures that some progress will be witnessed soon.

“For now we met the Minister for Finance and other agencies and that of the mining companies on how best they can at least take some of their revenue to fix the road. Plans are far advanced, we want to put some papers and documents together to get organized and start the roads”

In April, Five people were arrested in the Tarkwa Nsuaem Municipality in connection with a demonstration over bad roads.

Speaking on Eyewitness News, Acting Divisional Commander for Tarkwa Nsuaem Police Division, Superintendent Robert Kobil said the five were arrested for carrying on with the protest despite an order from the Police asking them to stop.

“We have arrested about five people. After talking to these five and appealing to their conscience [to end the demonstration] for so long they were still adamant,” he said.

The protest disrupted traffic causing gridlock on the over 10-kilometre Tarkwa-Ahietieso stretch of the main road.

The angry residents said the government had taken them for granted.

The Tarkwa Nsuaem area is one of the leading producers of gold in Ghana.

Heavy-duty vehicles transporting cocoa, bauxite and Manganese for export to the Takoradi Harbor also use the road, putting a lot of pressure on the stretch.

In September 2018, some Tarkwa chiefs led residents to block roads in protest bringing economic activities in the area to a halt.