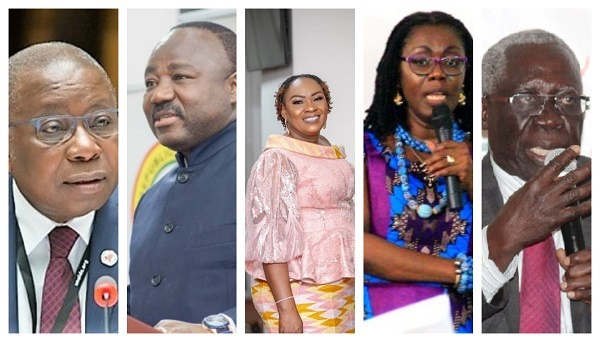 • The Sputnik V saga, Kelni GVG among others are the notable ones

Though the fight against corruption in Ghana has a rather long way to go and will always spark debate, the Akufo-Addo government, like previous ones, has been rocked by corruption scandals.

Having assumed office in 2017 with the promise of being an anti-corruption crusading party, the governing New Patriotic Party under President Akufo-Addo has also received their fair share of scandals.

While the debate for whether corrupt officials who amass huge wealth illegally are thoroughly punished when found culpable by the state is out there in the public, the corruption epidemic does not seem like one that would end any time soon.

GhanaWeb in this piece has compiled some top-five corruption scandals that have hit the Akufo-Addo government since its coming into office.

It is important to note that though some names have been cited in the corruption scandals, some have been cleared of wrongdoing, while others are still at various stages of investigation by Committees with others have resigned from their position.

The most recent of the scandals that has rocked the Akufo-Addo administration is the botched Sputnik V vaccine deal.

The matter come to light after a Norwegian news outlet, Verdens Gang, reported that Ghana, through the Health Ministry, had requested to purchase the doses of the Sputnik V vaccine through two businessmen who were selling it at high price of US$19 per dose instead of the US$10 per dose on the international market.

The outlet revealed that the Government of Ghana was using the services of middlemen to procure some 3.4 million doses of the Sputnik V vaccines produced in Russia which prompted calls for the deal to be terminated.

Health Minister, Kwaku Agyeman-Manu is said to have paid more than US$2.8 million to an intermediary businessman named, Sheikh Al Maktoum, for the procurement of vaccines only to be provided 20,000 doses out an initial first consignment of 300,000 doses.

This further raised a lot of questions of the minister’s actions which sparked widespread condemnation as he was subjected to the court of public opinion with many calls for him to resign.

Parliament, however, instituted an ad-hoc committee where the minister formally admitted he did not seek cabinet and parliamentary approval prior to engaging the middlemen for the procurement of Sputnik V vaccines.

The Dubai-based businessman, Sheikh Maktoum on his part agreed to refund an amount of US$2,470,000 of the US$2.8 million paid to him after the health minister in a letter, made a request for a refund of the money

The ad-hoc committee of Parliament probing the matter is however yet to conclude on its findings as at the time of filing this report.

Another scandal that has rocked the ruling government is that of the former Chief Executive Officer of the Public Procurement Authority.

Agyenim Boateng Adjei was first suspended by the president after it emerged, through an investigative piece put together by ace journalist, Manasseh Azure Awuni, that he was involved in procurement misconducts and selling of government contracts using a private company.

In the documentary, Agyenim Boateng admitted that he was a 50% shareholder of the said company named Talents Discovery Limited but indicated that he had duly declared his interests to the PPA board.

The piece also found that the private company had been awarded a number of key government contracts through restrictive tendering.

After widespread condemnation of Agyenim Boateng’s acts, he was, following his suspension, referred to the Commission for Human Rights Administrative Justice and Office of the Special Prosecutor for two separate probes. One of which involved potential acts of corruption and the other on conflict of interest.

After the two probes were conducted, a report by CHRAJ was submitted to the president who quickly terminated Agyenim Boateng’s contract for engaging in the illegal acts.

CHRAJ, in its report, concluded that “on the totality of the evidence, Agyenim Boateng had put himself in a position where his personal interests conflicted with the performance of his functions as CEO and board member of the PPA.”

Portions of the report further stated that the sacked PPA boss could not explain the source of what is termed as “Unexplained Wealth” as large volumes of financial transactions had passed through his bank accounts between March 2017 and August 2019.

CHRAJ further stated that Agyenim Boateng Adjei “handled large volumes of cash exceedingly in excess of his known income as CEO of PPA.”

A rather shocking incident occurred at the Ministry of Special Development as a whopping amount of GH¢800,000 was alleged to have been quoted in its budget for the designing of a website in 2017.

Though the sector minister, Mavis Hawa Koomson, later admitted the said amount was an oversight and was rather supposed to be GH¢80,000, the Minority in Parliament mounted pressure for her to resign.

Ranking Member of the Finance Committee in Parliament, Cassiel Ato Forson, described Hawa Koomson as grossly incompetent as he said she justified her explanation based on the reaction to public outcry of the revelation.

“What we considered at the committee is GH¢800,000, certainly not GH¢80,000. Is the Minister telling me that she is such an incompetent lady to the extent that she couldn’t read and understand her own document?” Cassiel Ato Forson said.

A formal communication on the findings of the alleged scandal is still yet to be provided as at the time of filing this report.

In June 2018, it emerged that the Ministry of Communications had entered into an agreement with a Haitian company named Kelni GVG, to monitor the revenue and calls operation of telecommunications companies operating in Ghana for 10 years.

Policy think-tank, IMANI Ghana had alleged that Kelni GVG had already been paid huge sums of dollars for no initial work done.

IMANI argued that Afriwave and the National Communications Authority had the requisite capacity to conduct the revenue assurance and calls monitoring exercise hence there was no need to engage another company to do same.

It also emerged that KelniGVG which was particularly known for the supply of building material and groceries had no specific office locations, a non-functioning website and reliable contacts for the project.

The US$178 million deal sparked debate and was subsequently subjected to a Parliamentary probe where the sector minister, Ursula Owusu-Ekuful, was summoned by Parliament to respond to questions over the deal.

Despite various petitions to get the Courts to intervene in the controversial deal of Kelni GVG deal, the contract was however approved with the deal currently in operation.

In 2019, Former Senior Minister, Yaw Osafo-Maafo and four other officials at the Ministry of Finance were cited by then Auditor-General, Daniel Domelovo for their involvement in the Kroll and Associates saga.

The A-G in a report concluded that the aforementioned breached the Public Procurement Act that culminated in a US$1 million payment to the UK-based firm for no work done.

Daniel Domelovo indicated that Senior Minister, Yaw Osafo-Maafo had on numerous occasions failed to provide an actual proof of work done by Kroll and Associates Limited.

This resulted in a legal but public battle between Daniel Domelovo and Yaw Osafo who was surcharged along with four others by the A-G who also recommended the disallowance of the payment of the US$1million to Kroll and Associates of which the Ministry of Finance had paid.

The Auditor-General was later abruptly asked to proceed on leave by President Akufo-Addo to take his accumulated leave. Domelovo a few days to his return was asked to leave his post on reasons that he had attained the statutory retirement age and questions over his nationality.

Everything is impossible until you take the steps to make it possible, be positive in every step you make. Nature will definitely give you the smoothest part of life. Email us on [email protected] Whatsapp: +233540577992
@HiplifeHiphop
Previous Bra Domino – Dede Feat. Lil Pezzy (Official Video)
Next Yaa Pono – Sovran (Full Album)